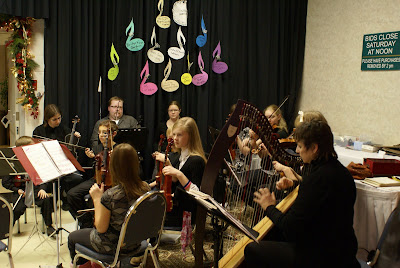 the christmas season is the musician's 'rush hour'. my students had 3 gigs in the last week. this one was at the annual Festival of Trees, where local businesses and philanthropists donate decorated christmas trees, gift baskets, etc for silent auction to raise funds for the hospital's palliative care facility. a couple of days before that it was a concert of music by canadian composers, and last night it was a local pot luck banquet, which was packed... and gave them a standing ovation. we all left with a warm glow and full bellies. now it's sunday afternoon and i'm kicking back with my feet up, recharging till next week's blur of activities.
Posted by gfid at 10:47 AM 12 comments:

i stopped by zee's 'place' earlier. he says he's going to be a teacher. i suspect he's already a teacher and he's just going about getting the official paperwork. some people just get other people thinking about things, and are good sources of info and suggestions. natural teachers. he seems to be one of those.

despite the current day job doing books for an evil oil company, i've been a violin teacher for most of my adult life, and i don't see any likelihood of that changing for the rest of my working life. it's a rich part of the whole. sometimes it's been the sole thing keeping all the broken pieces together. zee's plans got me thinking about the arts, and making a living in the arts, and attitudes about all facets of art. there's this perception among many people whose passions are not about originality and espression, that these things come easily, and are thus of little value. i've noticed that creativity comes naturally to some, and not to others, but i would never say it comes easily.

those who become skillful in the arts have put uncounted hours into learning to do what they do, just as those who are skillful at more 'practical' things have worked and studied hard to achieve their competence. yet, i've lost count of the number of artists and musicians i've known, who chafe in frustration at the inferrence that because they love what they do, and because this thing that they love, and do so well, is artistic, they shouldn't expect to make a decent living doing it. we should be grateful if someone invites us to do it for them, for free. or maybe for the leftovers of a free dinner, after we've entertained the other diners. there's no recognition that the beauty they're seeing or hearing didn't just take the few hours needed to physically produce it. there were years of study and labor, successes and failures poured into developing the skills that can produce the product so 'effortlessly'. i've never heard it suggested that a lawyer who has passionately practiced law, and become brilliant at it, should be paid peanuts.... or an engineer who has devoted a lifetime to finding the details of how something can be made to work should just be grateful for the opportunity to try.

there's supposed to be a hyperlink here

this is a recording of street musicians all over the world playing John Lennon's Stand By Me, together. Playing for Change is a movement that believes music has something important to contribute to world peace.... something only non-musicians didn't already know. they're building music and arts schools in south africa, just for starters.

more than 25 years ago, when i was studying music 'seriously', i came across a quote by the great cellist, Pablo Casals. he said, "perhaps it is music that will save the world."

he was a very cool guy, Pablo. another of my favorite quotes is from him. he worked very hard, practicing hours every day, even when he was considered by some to be the best in the world. when one of his friends chided him, saying, "Why do you still practice so much, Pablo? Nobody is better than you?" Pablo Casals replied, after a moment's consideration, "..... i think i've noticed some improvement."
Posted by gfid at 7:40 PM 2 comments:

what's in a word?

years ago, i was told by a friend who'd served in the swedish military that my last name was used on the swedes' latest and greatest tank. it was an ultra modern killing machine, all sleek and black and deadly, named after the vikings' war chariots. so for years i thought my last name meant 'war chariot'.... not terribly feminine, but i learned to live with it. hmmm, i thought..... as my first name is that of the goddess of the hunt....

Greek virgin Goddess of hunting. Many of her characteristics were transferred to Christian Virgin Mary. She is Goddess of young girls. Her father is Zeus, king of the Gods, and mother is Leto. Her brother is Apollo, God of hunting and healing.

... i guess it's fairly appropriate. then the other day i got meandering online, and thought i'd look up the literal translation. turns out it's not a swedish word, but a norwegian one, which translates....

the swedes added 'vagon' to this, for the war charriot.

so i mentioned this in passing to my lovely daughter the punster, who quipped, "hmm, the huntress and trouble. Mum, you're just looking for trouble."

took what little bit of romance was left in the whole thing right out. nothing keeps us humble like having kids.
Posted by gfid at 11:51 AM 7 comments: 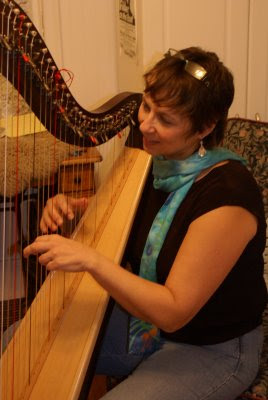 as promised some time ago, a picture for Susan, of her beautiful silk scarf, which was the prize for a draw on her blog. lucky me, i won it. i wore it to a harp gig i did some weeks ago, and promised a picture then, but the light there was very poor, and it was a very hectic evening, so the photo shoot never materialized. a visiting friend took this shot for Su, in my teaching studio at home. once again, thanks Su, for the beautiful wearable art. it makes the morning walk to work through the snow a celebration of all the lovely things in life. i've also been promising a sound bite of the harp, which isn't forgotten.... my digital recorder isn't agreeing with my Mac about how to bring this to fruition.
Posted by gfid at 9:01 AM 9 comments: