Some days you just can't come out on top 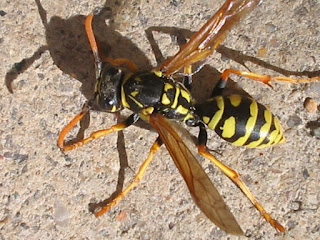 After a weekend of slogging away in chaos (aka home renovations) I went to bed sunday night exhausted, but satisfied with what was accomplished. The last of the three bedrooms floored in lovely  'click' bamboo. Goes in much like laminate flooring, but 3/8" thick and made of laminated strips of bamboo. Walls of the room all freshly painted and lovely new baseboards and trim around the door.

I'm so old I remember playing vinyl '78's, and I remember when 8-track tapes we're cutting - edge technology.  And I remember when baseboards and door trim were nailed on. Not so anymore. Glue is the way it's done now.  Really stinky glue with ghastly, noxious fumes. After working with the stuff all day Sunday and sleeping in a house reeking of it (though, I assure you, ALL of the windows were wide open) I woke this morning with a mother of a migraine. Nothing good drugs and sleep can't cure, but it means a day off work at a time when I need to be there... And my brain feels so bruised after one of these that it's not good for anything strenuous for a day or 2 afterwards. But we learn to cope.

Towards the end a day of drugs and sleep,feeling nearly human again, I took the dog for a short walk. He was over the moon. Migraine days are not fun for him.   So he  did his happy dance, then bounced into the bushes with serious business on his mind.  He's a funny guy - he likes his privacy in moments like these, going as far out of sight as the leash will allow, and turning his back to me. I try to be respectful and turn my back as well.

He came bounding back with his usual joi de vivre, and it wasn't till he began rolling about on the lawn, rubbing at his face and chasing his tail that I suspected something amiss.  When he held still long enough to get a good look at him, my drug and pain dulled brain didn't at first comprehend what the little yellow bits in his long, thick, curly hair were.  Pain, however, is a very good learning tool,

so as soon as the first ons stung me, I figured it out right away. Yellow jackets! And lots of them. The pooe dog was writhing on the ground in panic, and all I could think of was to beat them off of him.    It seemed to work somewhat. A number of them left him alone and concentrated on me. Somehow we ran the rest of the way home, with me beating at both of us, till, standing on the doorstep, I did my best to slap the ones off of me and brush them away from him, and we made as quick an entry  through a minimally opened doorway as possible. inside the house I concentrated on pulling angry   wasps from his thick, curly hair. I did successfully extricate a number without getting my hands  stung, but they managed to find some other juicy bits of me to bite. I don't know how many times   either of us got stung, but I'm certain he got the worst of it, poor boy.

Once I was fairly certain the dog had no more hitch hikers I noticed one or 2 still entangled in my own hair and clothing, who had no interest in parting ways. I'd no sooner disentangle on, tha another would alight with murder on his mind. In a flash of divinely inspired brilliance, it occurred to me that, like flies, they might head for the window if the room was darkened... So I turned out the lights and patrolled the windows with a fly shatter.. Even so, it was some time and many insectile corpses before I felt safe in my own home.

Back to the dog, who was pacing and panting in a panic, to find that he still had a few entrapped in his hair. He seemed to believe I was doing something to improve the situation, though, as he came immediately when I called him, standing, all a-tremble, for me to tug and tear at the terrifying things in his hair. I had tostop  periodically to swat at the odd one who preferred me to the window. I haven't counted the corpses on the floor.  Something in the neighborhood of 20, I think.

Then I had to settle the dog enough that I could run a brush through his curls, making sure we really had got them all. He was wide eyed and trembling, panting so hard I was afraid he'd hyperventilate.... Can dogs hyperventilate? He had that wacant, staring look animals get when they're in pain, so I got the children's Advil from the cupboard, and gave him the dosage recommended foe his weight.  It seemed to take a long time for the trembling to stop, and even longer for his breathing to return to normal, and he was glued to my side as I prepared for bed.

Only then did it occur to me to google 'dog stung by wasps'. Turnd out I should have given him antihistamines
Posted by gfid at 10:34 PM 8 comments: