order from chaos, or a ReStore is born 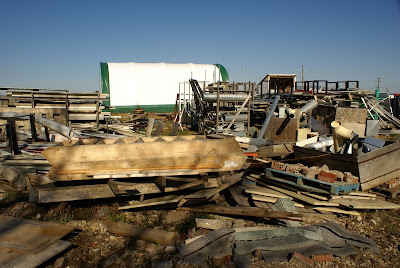 this vision of loveliness is the yard of my new ReStore.... 2nd hand, really.... the store, and the stuff. the site was subcontracted out by the local landfill operator to a private business, for the purpose of diverting materials from the landfill for the purposes of recycling and minimizing all that un-green waste. so what we have is a secondary landfill, now... only all above ground. we had 67 hours of volunteer labor last saturday, working very hard, and filled 2 monstrous rollaway disposal bins... the 20 or 25 foot long ones that take a big semi to load up and carry. and you can hardly tell....

once we get rid of the stuff that's undeniably trash, i'll have a huge truckload sale. all you can cart off for $100. we have hundreds of old windows, even more doors, dozens of lights, from chandeliers to swedish balls (remember the swedish ball?) bathroom fixtures, bricks, boards, yadayadayada. then we'll cull one more time, and start the store in earnest.

my first meeting with the Home Depot folks is tomorrow. they're huge supporters of Habitat for Humanity, and the manager made a strong point of telling me he really dislikes trashing things when they have to come off the floor. that's the policy. we're 6 hours from the next nearest city, half a continent from the manufacturer. the stuff can't be returned if it doesn't sell.

still looking for a cube van.

funny thing happened on Sunday morning. after wading through this stuff for 12 hours on Sat, i cleaned up real pretty Sunday morning, then went to do some admin work at the store before the long trip to the granny shack for violin lessons later that day. as i was standing by the chain link gate, locking up before leaving, a truck with a couple of fellows came cruising slowly by. we get a lot of that. people are antsy to see the place reopen. so the driver of the truck pulls up beside me, looks me up and down in that arrogant 'what have we have here?.... if i had a moustache, i'd twirl the ends' way some men have. and he says, clearly thinking he's making a very clever joke, "so are you running it now?" i smiled demurely, handed him my business card, and said, "sure am. Come back on the 6th of June and you can fill that big shiny truck of yours up for a hundred bucks."
Posted by gfid at 8:38 PM 9 comments:

blessed are the feet of them that bring good news

a.k.a. don't shoot the messenger 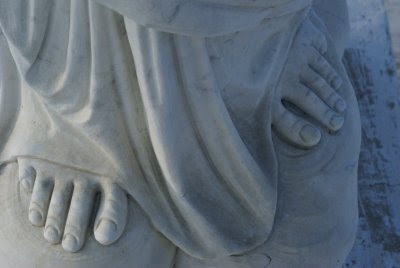 i did some evangelizing today. what began as a seemingly innocent discussion of the local economy with my daughter's significant other today transmogrified into a session on my soapbox.

we live in a small (50 - 55 thousand souls) northern city that has seen a lot of boom and bust cycles. it's in an area that's rich in oil and gas, surrounded by forest that's among the best in the world for pulp and paper production, as well as lumber, first settled by farmers who discovered it's a pocket of rich agricultural land a zone or 2 warmer than other places this far north. during the depression that followed the 2nd world war, this area was not as hard hit by drought, economic downturn and food shortages as were other parts of North America. partly because the climate is moderated by our location between mountains and prairie, with lots of lakes and rivers, partly because the economy has always been so diversified, and partly because the inhabitants were self sufficient pioneer stock who knew how to keep things solvent with very little in the line of cash.

i'm not convinced there are many here today who could manage as well. it seems to be all about money now. so when the gentleman in question, who is head of a fairly large communications company here, asked me if i thought the local/regional economy was in trouble, he probably expected me to agree with his view that things are going down the toilet, and that would be that. he didn't expect a dissertation on how the wealth of the community was being sucked out by the big oil and lumber companies, and the big box stores. he didn't expect to be told that a community's wealth isn't measured in dollars and cents. he didn't expect (or enjoy) being told that the premise that exponential financial growth is the only marker of a business's success, was dangerously flawed. they live in a big house that they bought new about 5 years ago, in a trendy new neighborhood. they drive new vehicles, and trade up frequently. take lots of holidays to the tropics. he didn't like being asked "why? how much do you need?" when he said he wanted to make more money, have a bigger house.

none of this was particularly heated, it was all very civilized and polite. he's a kind man, who is very good to my daughter, granddaughter, and the rest of the family. he's a good neighbor. he recycles, pays all his bills promptly, and is considered by his employees to be an excellent boss. he's putty in the hands of a child, has pets who are treated like they're his own beloved children. he cooks! he cleans! a really sweet guy. just very materialistic, with no social conscience beyond his own doorstep.

i think there's a crack in the polished veneer, though. he's applied for a senior position in the fire department. says he thinks he might want to do something more 'worthwhile and satisfying'.

one of the really great things about moving to the city is all of the family things i can be part of. this is granddaughter, Brooklyn, at her first riding lesson, with a dainty little quarter horse called Cocoa. Brooklyn is 8, and very much her own person already. she insisted on riding English, though Western is the fashion here in cowboy country. she's a well balanced girl, though, and has a very funky pair of pink suede cowboy boots that she loves to wear to school with her denims. 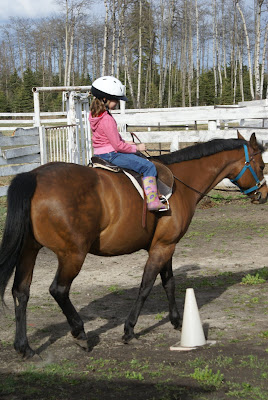 so grandma was the official photographer for the first riding lesson. then sneezed her brains out all the way home, as she's excruciatingly allergic to horses.

friday, the Alberta Opera Co. is coming to her school. everyone's invited!
Posted by gfid at 8:38 AM 18 comments:

the granny shack is finished!!!!

and listed for sale 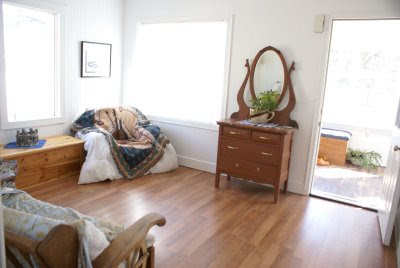 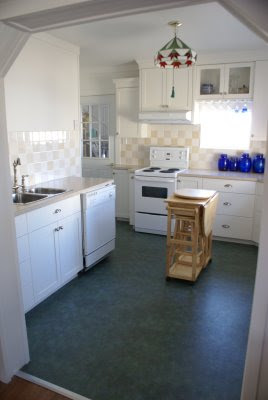 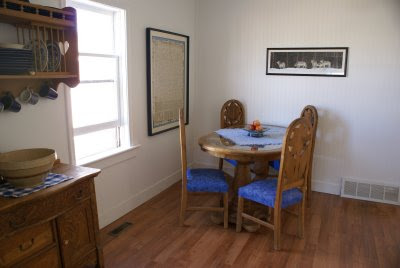 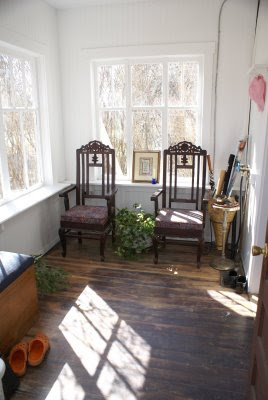 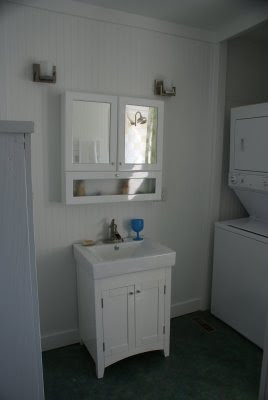 below are:
dining room
front porch
bath
Posted by gfid at 10:43 AM 10 comments: