some need a red sports car 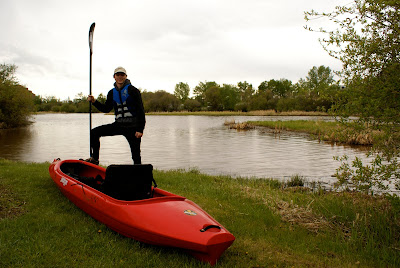 .... for me it's a red kayak. ....with the most beautiful carbon fibre paddle. purchased recently, i suppose this must be my midlife crisis happening....
and a handsome young black haired four legged portuguese fellow to go with it. my kids have named the new canine member of the family (who should be coming home in mid August) Maestro. this is their revenge, after decades of putting up with my musical preoccupation.
just shortly after we put in, the skies opened. son David, in the picture, (though he's handsome, he has only 2 legs, and brown hair) had borrowed my wetsuit, as he had no bathing suit with him. he was cold enough, but i was soaked to the skin and cheerfully hypothermic. we then went home for a nice hot cuppa.
she's a 12 foot Jackson Daytripper. not meant for 2 people, and doesn't exactly turn on a dime loaded up like that, but she can do it when need be, and she'll have no trouble carrying me, some gear, and a puppy. and she's easy for me to load and unload from my little truck all by myself.
Posted by gfid at 11:38 PM 7 comments: 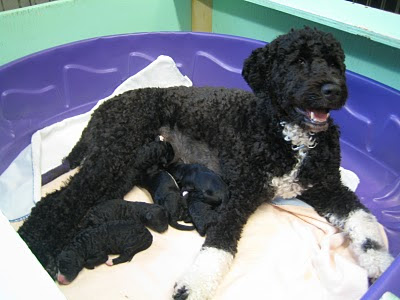 meet Sadie, Portuguese Water Dog and mum of my puppy. one of these adorable little wigglers will be coming home with me late in July, after the breeder has made her selection. my daughter and granddaughter have already named him for me.... Maestro. Porties are one of the 'hypoallergenic' breeds. this was a big issue for me, as i'm very allergic to furry things. they were bred in Portugal (what a surprise) by fishermen, for use as working dogs. they helped set nets, ran errands from boat to boat, and did water rescue. they're now used predominantly as water rescue dogs. very intelligent, males about 65 lb, high energy with long wavy hair. Sadie has had a haircut.
my ReStore is on the edge of an undeveloped area which is popular with homeless people in our city. they have good taste; it's a lovely part of town. but some of my board members worry about my safety during the time i spend at the store alone - opening and closing, and working before and after hours. so, when i suggested that i might have a dog with me at the store, they liked the idea.
it's a bit odd, this sudden loneliness i'm feeling. my dear friend Laurie, who died recently, lived more than a thousand miles away, and there were sometimes stretches of time when i didn't see her for a couple of years. at times we kept in touch only sporadically, over the 30 years we knew each other.... it's not like she was involved in my daily life. but she was always THERE. reliably and permanently connected directly to my heart. i've never felt such loneliness as i've experienced since she died. it's an ache that just doesn't go away. so i want this puppy very badly. unsure what the connection is, but there seems to be one. perhaps i'm expecting too much of this pup. but i think in need something that needs me, and that needs to be exercised and entertained, to bring me out of my funk, as i tend to be reclusive when i'm unhappy.
i've mentioned to my staff that there may be a pup joining us at the ReStore later in the summer, and shown them the pictures. after the 'aaaaaaw's' they stoically assured me that it would be a hardship, but they thought they could tolerate that.
Posted by gfid at 10:49 PM 7 comments:

The excitement is BUILDING! 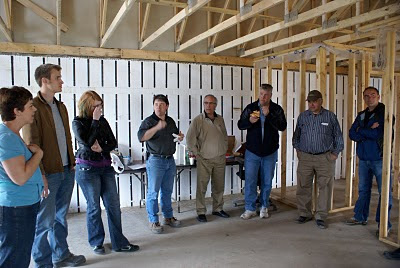 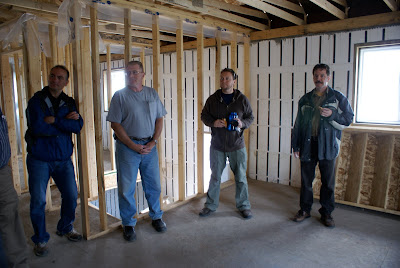 And, lo, a mighty host appeared, clothed in shining .... denim? and the joyful sound of .... hammering? was heard throughout the land.
Behold, Habitat for Humanity Waynorth's 2010 contribution to breaking the cycle of poverty through enabling low income families to own a home. This is an ICF (insulated concrete form) duplex, with walls rated at R50. Windows and doors are all low E - i'm told you can nearly heat these places with a candle. The folks you're looking at are Habitat for Humanity staff and board members, and some very generous building contractors who are providing their services at very low cost. This was our first 'official' meeting w everyone all in the same place. Not easy to manage, but a lunch meeting with free pizza convinced them to come. We're also hoping to begin a renovation in the fall, of a home built in the 70's, in need of TLC, which we may be purchasing from the city.
These folks all look pretty ordinary don't they? That's the really thrilling thing about Habitat. Everyone IS pretty ordinary. No divas or superstars. But together we make a very big difference.
I was in my granddaughter's classroom this morning. She and i did a little musical interlude for everyone, with our violins. About 15 kids. So far, our little HFH affiliate in north-of-sanity Waynorth has put 9 low income families with a total of 30 children in their own homes. It's been shown that NOTHING breaks the cycle of poverty more effectively than home ownership. That's 2 elementary school classrooms full of kids whose families now have equity in their own homes to help build their futures with.
I love my job.
Posted by gfid at 1:12 PM 5 comments: