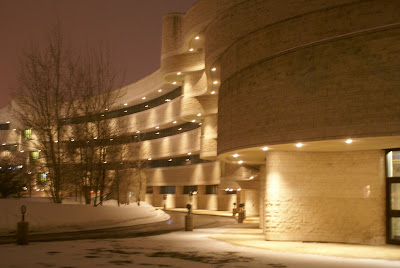 from my trip to Ottawa.... the museum of civilization was of particular interest to me, because the architect, Douglas Cardinal, had also designed the building where i studied music, Grande Prairie Regional College. 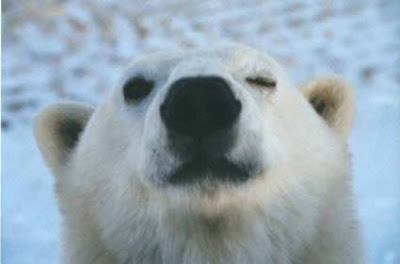 ... but it's just a little pathetic living in a place where the first day of spring means the snow is starting to melt.
Posted by gfid at 12:09 PM 7 comments:

i've been tagged by Granny P to give 7 weird things about myself....

weird (adjective)
1. odd - strange or unusual
2. supernatural - belonging to or suggesting the supernatural
3. of fate - relating to or influenced by fate

actually, i'm having trouble narrowing it down to only 7.

1. my mum used to tell me i started singing before i could talk. as i was adopted, and there's not a single musical gene to be had in my entire adoptive family, that doesn't inhabit my body, this made me pretty weird amongst that crowd. so when the public school system began orchestra and band programs in my 10th year of driving them all crazy with it, my dear old gran cornered her first-born son, my dad, and told him, most adamantly, "you get that girl in music lessons!" what i really wanted was a flute, but, budgets being what they are, and there being 4 other kids to raise, they went with the cheapest instrument they could get. a fiddle. the rest, to borrow a cliche', is history.

2. i love liver. coated in cornflour and garlic powder, fried in butter with about a hundred pounds (45 1/2 kilos) of onions.

3. i've been married 3 times (metric equivalent is the same). they all ended badly. marriage doesn't appear to be something i'm good at, so i've given it up.

4. i once lived , pretty much off the land, for 6 years, in a log cabin on the banks of the Yukon River. ...well, actually, several log cabins, ranging from 3 miles (5 km) to 35 (58.3 km) miles upriver from Dawson City. always upriver, in case the motor on the boat gave out... i could always float to town for help. during the (excruciatingly long) winters i travelled by moccasin, x-country ski, snowmobile and dog sled. my lead dog was a brilliantly intelligent, gentle, gorgeous silver part-wolf husky named Sis. most of my time there my only company was 2 small children and the dog team. they say that kind of isolation leaves a person a bit weird.... that could explain some things.

5. i've eaten some strange flesh. (see #4) beaver, porcupine, various fowl and fish, squirrel, wild rabbit, lynx, moose, caribou, deer, elk, bear were all pretty standard on the menu at the time. many of them i had to kill before i could eat them. salmon was a mainstay, as the Yukon is a major route for King Salmon and Chum (dog salmon), on their way to spawn. it was what we fed the dogs, and ourselves. i never got tired of salmon - had tinned salmon for lunch today, in fact.

6. i rode in the Numb Bum the last year it ran in Fairview, Alberta. this is a 24 hour motorcyle marathon that was run by Fairview College's Harley Davidson training faculty each year. in February. on a frozen frog pond called George Lake. temperatures that year hovered in the -35C vicinity for the duration of the event. probably lower over night. i'd had a dirt bike as a teen, and a friend was looking for volunteers for a team, so i volunteered. we put duct tape on the bridges of our noses to keep them from freezing, and sheet metal screws in the knobby tires of the bikes to give traction on the ice. when it was all over, everyone wedged the front tire of their bike firmly in a snowbank at the edge of the track, and revved the engine this threw rooster tails of ground ice off the back tires as the sheet metal screws dug a trench. it was really quite spectacular to see.

i'm supposed to tag 7 others, but i have a very small blog community, and i see most of you have already done something like this, so, i appologise, Penelope, for dropping the ball.
Posted by gfid at 11:24 AM 11 comments:

in the national gallery 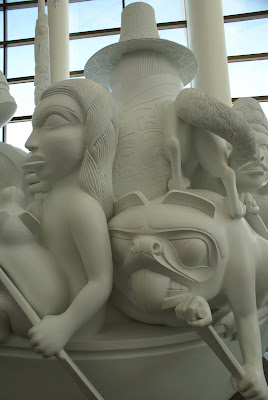 The Spirit of Haida Gwaii


Spirit of Haida Gwaii, Bill Reid's largest and most complex sculpture, is displayed at the river end of the Grand Hall. As if heading for the shoreline of the coastal village, the Spirit of Haida Gwaii represents a Haida canoe crammed with a bewildering variety of paddlers and passengers. The white sculpture is the original plaster pattern used to cast the bronze sculpture at the Canadian Embassy in Washington, D.C. The plaster-cast was acquired by the Museum through the generosity of Maury and Mary Margaret Young of Vancouver.
The Spirit of Haida Gwaii features Raven and Eagle, the two principal Haida lineages that are coequal and represent two halves of a whole. The sculpture encompasses mythical creatures, animals, men and women, who together symbolize not just one culture but the entire family of living beings. The canoe is filled to overflowing with creatures who bite and claw one another as they doggedly paddle along.

From left to right, the creature sitting in the bow is Grizzly Bear, facing Bear Mother. Between them are their two Bear cub offspring, creatures that grew out of a children's poem by A.A. Milne. Next are: Beaver, who lived on the ocean floor hoarding all the fresh water and fish in the world; Dogfish Woman, with a great hooked beak, gill slits on her cheek, and a pointed head; and Mouse Woman, the traditional guide to those who travel from the human world to the non-human realms of Haida mythology.
At the stern is the steersman, Raven; he seems intent on manoeuvring the boat in a particular direction, but he may change course as his whim dictates. Beneath Raven's wing is a human figure, the grudging oarsman; he represents all the common people who labour to build and rebuild, stoically obeying orders and performing tasks allotted to them. Arched across the centre of the boat is Wolf, with his hind claws in Beaver's back and his teeth in Eagle's wing. Beneath Eagle is Frog. The prominent central figure is a shaman, the Haida chief Kilstlaai. As a symbol of authority he holds a speaker's staff; on the top of the staff is Killer Whale.
Commenting on where this boat may be heading, Bill Reid says:

There is certainly no lack of activity in our little boat, but is there any purpose? Is the tall figure who may or may not be the Spirit of Haida Gwaii leading us, for we are all in the same boat, to a sheltered beach beyond the rim of the world as he seems to be or is he lost in a dream of his own dreaming? The boat moves on, forever anchored in the same place.
Posted by gfid at 12:08 AM 1 comment:

years ago, on a very brief visit to the Ottawa area, a fellow talked about skating to work on the Rideau Canal. it sounded like such a lovely way to get to work, that i was envious. then, just a few short years ago, another fellow, who moved into my neighborhood, and happened to be a musician, became a good friend. somehow the subject of the canal came up in conversation. i told him how i'd love to skate it one day. he then told me the lovely and romantic story of his grandfather, who, as a young man, lived in Ottawa, and skated the canal with his violin strapped to his back, to and from teaching violin lessons at a girls' school run by nuns there. a certain very lovely young nun was a very fine pianist, and often accompanied him, and his students in performances. as they became better acquainted, he fell hopelessly in love with her. they had much more than music in common, and in time he persuaded her to leave the cloister and become his wife. all of their children, and every generation since, has been made up of exceptional musicians, so i'd say the union was well blessed.

since hearing that story, i've been more determined than ever, to visit Ottawa in winter, and skate the Rideau canal. as luck would have it, a very good friend moved to Ottawa in the fall of 2007, so it seemed like the perfect set-up.... visit my friend, and check one thing off my 'bucket list'. 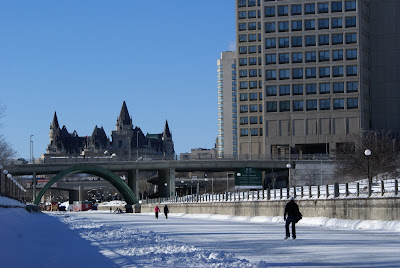 it was cold, for Ottawa.... -15 C with a brisk wind. but to a northern alberta girl, who's spent a number of years in the Yukon, that was no deterrent at all. and i had only one day left before returning home, so i borrowed some skates from my friend, and off i went. 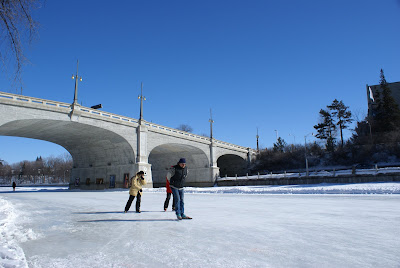 i started out @ Dow's Lake. after a couple of nasty falls ..... feet take air, and head for the heavens.... thud!! oh please, God, no.... i didn't land on the camera!!!? .... no.... the pain in my hip says i didn't...... i learned that ice is much harder than it used to be years ago. stopped midway for a world-famous Beaver Tail (maple drizzled) coasted elegantly to the 0.0 km marker an landed gracefully, if somewhat suddenly, on my bum. i'd thought at the beginning that i'd be lucky to make a kilometer before every thing hurt.... between the falls and the not having been on skates for more than 30 years, but it was too much fun to quit, so after covering the distance from Dow's Lake to the zero marker, i turned around and skated back to Dow's Lake, where i finished up with some mexican food and a Guinness at the pavilion @ Dow's Lake.
Posted by gfid at 11:30 PM 2 comments: 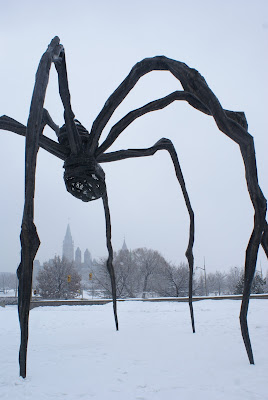 "Maman is emblematic of her mother, Josephine, a restorer of tapestries in the family-run restoration business. the spider's high, arched legs descend into points evocative of sewing needles, while her spiraling body suggests sewing spindles as well as the double helix of genetic string that binds one generation to the next. Attached to Maman's abdomen is a cage-like sac containing twenty marble eggs that assert her maternal role as protector and nurturer. '[my mother was my] best friend... deliberate, clever, patient, sooting, reasonable, dainty, subtle, indispensable, neat, and useful as a spider'."

Since last August, i've been musical director for a musical production in nearby Grande Prairie. Oklahoma! opened Feb 21, and has been getting good reviews. 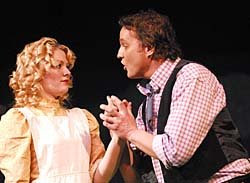