coming soon to a computer screen near you
Posted by gfid at 8:43 PM 8 comments:

On the subject of Outhouses

With the advent of the winter's first snow, I'm discovering a renewed appreciation for indoor plumbing. ....so I thought I'd take a short rabbit trail round back to the outhouse, where we'll find interesting details those with a more innocent upbringing than I may be unaware of. I'll amaze you with previously unknown facts about: 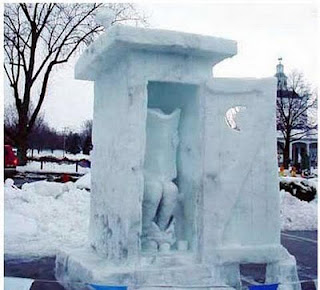 stalagtites
a new definition of luxury
flora and fauna
what O.J. thinks of indoor plumbing
paperwork
sound effects
how you can tell the difference between really cold and BLOODY cold without a thermometer
and much more!

but first, a poem from the Yukon's beloved bard, Robert Service

Ma tried to wash her garden slacks but couldn't get 'em clean
And so she thought she'd soak 'em in a bucket o' benzine.
It worked all right. She wrung 'em out then wondered what she'd do
With all that bucket load of high explosive residue.
She knew that it was dangerous to scatter it around,
For Grandpa liked to throw his lighted matches on the ground.
Somehow she didn't dare to pour it down the kitchen sink,
And what the heck to do with it, poor Ma jest couldn't think.

Then Nature seemed to give the clue, as down the garden lot
She spied the edifice that graced a solitary spot,
Their Palace of Necessity, the family joy and pride,
Enshrined in morning-glory vine, with graded seats inside;
Jest like that cabin Goldylocks found occupied by three,
But in this case B-E-A-R was spelt B-A-R-E----
A tiny seat for Baby Bare, a medium for Ma,
A full-sized section sacred to the Bare of Grandpapa.

Well, Ma was mighty glad to get that worry off her mind,
And hefting up the bucket so combustibly inclined,
She hurried down the garden to that refuge so discreet,
And dumped the liquid menace safely through the centre seat.
Next morning old Grandpa arose; he made a hearty meal,
And sniffed the air and said: `By Gosh! how full of beans I feel.
Darned if I ain't as fresh as paint; my joy will be complete
With jest a quiet session on the usual morning seat;

To smoke me pipe an' meditate, an' maybe write a pome,
For that's the time when bits o' rhyme gits jiggin' in me dome.'
He sat down on that special seat slicked shiny by his age,
And looking like Walt Whitman, jest a silver-whiskered sage,
He filled his corn-cob to the brim and tapped it snugly down,
And chuckled: `Of a perfect day I reckon this the crown.'
He lit the weed, it soothed his need, it was so soft and sweet:
And then he dropped the lighted match clean through the middle seat.

His little grand-child Rosyleen cried from the kichen door:
Oh, Ma, come quick; there's sompin wrong; I heared a dreffel roar;
Oh, Ma, I see a sheet of flame; it's rising high and higher...
Oh, Mummy dear, I sadly fear our comfort-cot's caught fire.'
Poor Ma was thrilled with horror at them words o' Rosyleen.
She thought of Grandpa's matches and that bucket of benzine;
So down the garden geared on high, she ran with all her power,
For regular was Grandpa, and she knew it was his hour.

Then graspin' gaspin' Rosyleen she peered into the fire,
A roarin' soarin' furnace now, perchance old Grandpa's pyre....
But as them twain expressed their pain they heard a hearty cheer----
Behold the old rapscallion squattinn' in the duck pond near,
His silver whiskers singed away, a gosh-almighty wreck,
W i' half a yard o' toilet seat entwined about his neck....
He cried: `Say, folks, oh, did ye hear the big blow-out I made?
It scared me nearly half to death. I hope you w'unt too afraid.
But now I best be crawlin' out o' this dog-gasted wet....
For what I aim to figger out is----
WHAT THE HECK I ET?'
Posted by gfid at 2:40 PM 11 comments:

A guy from Teslin Lake we met at Haines Junction weigh scales and his woman stopped by on their way home from fishing at Haines, Alaska. They caught 5 Dolly Varden.

Gave us two for the cat. 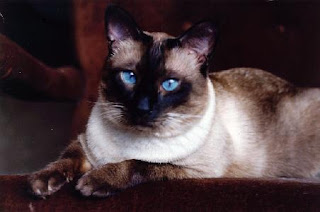 As I recall, the cat got the head and fins. Dolly Varden is good fish, and we weren't too proud to eat someone's bag limit overflow... or whatever they were. The cat's name was Bagheera - named after the panther in Kipling's 'Jungle Book'. This was before I knew my frequent colds etc were due in part to animal allergies. He was a gorgeous fellow, huge, gentle and patient, once he got over his kittenhood belief that he was the most dangerous creature on 4 legs. Unlike every other cat I've ever known, Baggy came when called. He had the famous Siamese yowl, but, for the most part he didn't have a lot to say, unless he thought he was late for lunch. The strong, silent type. A purr like an idling tank. He came into the family just a few months after we got the German Shepherd pup... the one mentioned a while ago, who had porcupine radar. On arrival, Baggy entertained us for weeks at the dog's expense, with his fierce attacks. His favorite skulking hideaway was just behind the woodstove in the kitchen of the house we rented before heading to the Yukon. The dog was half grown by then, so he was too big to fit in the space between the woodstove and the kitchen wall. This became the kitten's private domain, as he was brand new, and hardly more than a pocketful full of creamy fluff.
The dog was Kochise. He loved everybody, without any bias as to race, species or gender. He especially loved that vicious little Siamese kitten. He responded to attack after attack with a smile and a wagging tail, certain that they'd soon be friends. The kitten wasn't convinced. He stalked and pounced, scratched and bit until he learned that the monster dog's most vulnerable spot was his big black nose. Baggy would skulk and peep until he saw Kochise nod off to sleep on the floor near the stove, then skitter out on tiptoe and POUNCE right on that big, black defenseless nose. Kochise would waken with a confused yelp to 20 needle sharp claws embedded in his tender nose. It wasn't a game. Baggy was out for blood - certain he was big enough and tough enough to take on anything. So the poor dog would paw - always gently - and lick and whine until he could dislodge the wretched feline from his injured proboscis. He'd lick the blood off with tears in his eyes, while the rotten cat skittered back to his vantage point to plan the next skirmish.
On a brisk fall day, they were each napping in their favorite spots near the crackling stove. Bagheera woke, stretched, and peered with evil blue eyes from behind his fortress. Aha! The monster slept. Perhaps he wasn't quite awake yet, or maybe he thought he'd try a new angle of attack. Whatever the reason, on this particular day, he leaped, not for the nose, but onto the end of Kochise's tail, sinking claws and teeth into it with fierce delight. The dog, of course, awoke immediately, lifting his head to look over his shoulder for the cause of the pain in his tail..... and broke into a toothy grin. It was his little friend the kitty! The tail began to wag. Thud! With .... thunk.... the kitten... konk.... attached.... whump. Thud. Thunk. Whump. Konk. Thump. Bonk. Clunk. Thud.
Stunned nearly to unconsciousness, the fearless predator lost his grip and tumbled to the floor. He was then scooped up by a careful black and tan paw, held down by another huge black and tan foot, and licked until he was a slobbery, slimy, dripping dog breath smelling mess. A few half-hearted feeble hisses and spits were vanquished by a tongue bigger than his body. They were fast friends from that moment onward. Until the cat got too big for this method of transportation, the dog liked to carry him by the head. He'd take the cat's whole head in his mouth, with the limp and completely relaxed cat's body hanging out the side. There was seldom any complaint about this. If Kochise was less careful than he might be, Baggy would reach up with a paw and poke the dog's nose lightly with a claw as a reminder to be more careful.
As they both reached maturity, they were often found curling up together at nap time, Baggy between Kochise's front paws, or at his belly, and they'd groom each other before they nodded off. When we travelled to the Yukon, at every pit stop, they'd leap out of the truck and rush off to explore. When the time came to hit the road again, at the sound of a bellowed "Kochise!......... Bagheera!" the enormous pointed ears of the German Shepherd and the brilliant blue eyes of the Siamese would appear from the shadows, each above its respective smile.
Posted by gfid at 10:21 PM 7 comments: