I hope to be the kind of person my dog thinks I am.
Unknown Author 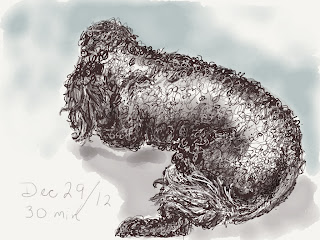 As I finished breakfast on the last day of a trip away from home,  my cell phone beeped an incoming text message.  It was a number I didn't recognize.

Aside from the number being unfamiliar, my daughter, who lives with me and is the only person likely to need my keys, was on the same trip, and sitting across the table from me, so I wondered who thought they needed my keys.... and which keys they wanted..... youngest son was expected to come for Christmas in a week or so, but he knows where the 'emergency' key is kept. He was the only person I could think might be asking, but it seemed unlikely that he would be.  I replied:

Who's asking?
The immediate answer was:

What you mean whose asking? Wheres my f**n keys

The censoring is mine..... this didn't sound like my son. I wondered if I should even reply to a pretty obvious - and obnoxious-  wrong number.  Surely they'd figure it out.  While I was ruminating on this, I received:

Well where r they

And have the nerve to say whose asking? Probly not even for me

Not sure what that means, but it doesn't sound good.  It might be a good idea to let them know that they haven't got the person they intended to call. So I replied, I confess, a bit grumpily:

Please check the number you're calling.  And learn some courtesy.

I was surprised how quickly the response came back.

....eep!  now they're REALLY angry.  I began to worry for the safety of the party I was unknowingly impersonating.  I had to make it clear that there had been a mistake. I sent:

You have the wrong number.

There. That aught to do it.

Yea yea. Doors will be locked n u can get the f*k outta lifes

For crying out loud! How plainly can I tell them this isn't the person who can tell them where their blasted keys are!  Now I was really worried that someone was going to get thrown out of their home or maybe even seriously hurt over a silly misunderstanding.  Direct, straightforward language doesn't seem to work, so I'll have to try something that makes it clear that this is someone they don't know.  I've been reading a lot of flowery old literature.... was in the middle of  Wilkie Collins' Woman in White at the time..... and I was more than a little grumpy by now about the whole conversation, so I sent the following:

If i had any idea who you are I would cherish the moment I complied with your request. The person you think you're conversing will be fortunate indeed to be done with you.

That should do it.

Lmao! Yea yea u think i gaf about him. I jus realized i am one number off. Stupid iphones. If u only knew the whole story im sure u woodnt be saying f**k all. But just like any white person ur s**t dont stink n u think ur something Special!

U think any man who hides kesy on 6 month pregnant woman n steals her chikdrens money for crack is a f***ing joke! Im supposed to be nice n ask politely n be courteous when asking for my f***ing keys! U can go f**k yourself n have a merry f**n christmas a**hole

Okay.  That's enough.  I'm not opening the next one.  I feel very sorry for you and your children (how many poor kids are living in this place with these people, I wonder) but I didn't put you there - you put yourself there. Besides, I don't even know where 'there' is.  Please, please, please learn something from this, and don't mess around with guys like that anymore.  Should I tell her that? I wrestle with this for a few minutes, then tell myself, NO.  I'm not an addictions counselor or a psychologist.  I don't have a clue how to help her, and she's not going to take any advice from some white person (?!) whose s**t don't stink.  I will definitely not reply.  I will turn my phone off.

For a little while.

I'm expecting to hear from the son who's coming for Christmas, so I won't turn it off for long

I'll turn it back on now.

I hope she doesn't text me again.

When I got home there were a couple of more conventional Christmas greetings in my mailbox. There were no more profane Christmas Greeting text messages.  I must be getting very old and boring.  I liked the conventional ones so much better.

As my world is blanketed in white, and the sun grows daily weaker, the gardening books are searched out, carefully dusted off, and take up residence on coffee tables, kitchen counters and bedside tables.  Though I've ruthlessly culled my 'library', these are never at risk.  Winter would be bleak indeed without them.  They're the only living green I see for many months, with the poor exception of indoor potted plants - pathetic shadows of their wild cousins in warmer climes. Think of the huge and sprawling groves of rubber trees in the tropics, then of the sad, gangly thing Aunt Bertha in Calgary proudly calls her potted rubber tree.  Even evergreens look less green than grey or even black, in the dim light and deep cold of a northern winter.

One of my favorites is Really Small Gardens by Jill Billington. 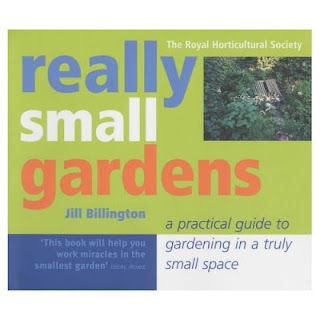 This color sketch was done on the iPad, from a photo in it of a stone garden fountain. 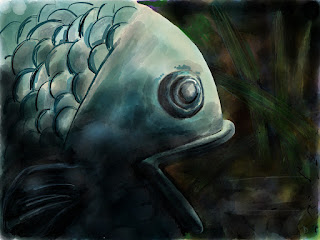 I did the one below last night after taking the dog out for his bedtime trot.  We'd had ice fog for the past couple of days, with extreme cold. Everything was crusted with glittering magic.  There was just enough light from the street lamp at the end of the alley to make things sparkle in the biting cold. I'd laid a fire in the fireplace before going out, and turned the kettle on. 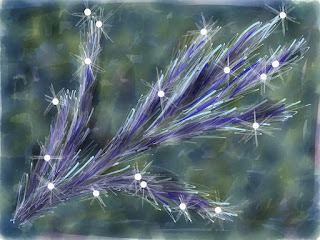 I suppose the warm fire, hot cuppa and the dog curled up on my feet as I cozied up to doodle wouldn't feel nearly so delicious if i hadn't just come in from that brutal cold.  Perhaps we need contrasts to teach us the worth of what we have... despair to learn joy; darkness to realize light; loneliness to cherish love;  adversaries to value friends; dearth to savor abundance; hardship to be grateful for comfort; and cold to remind us that we cannot live without warmth.

Still playing with the Paper 53 app on my iPad. 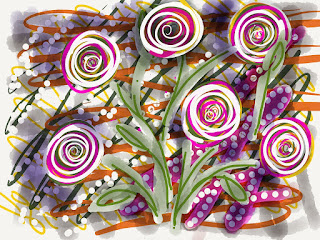 This was an experiment in color and texture, learning which 'strokes' are transparent and which are opaque, and how they interact together.
Posted by gfid at 10:38 PM 6 comments: