How the time flies..... especially in summer.   Several weeks into the new job, which I think is going well, and i happened across the pictures of my brief holiday @ Lesser Slave Lake, taken just before I began the new job. 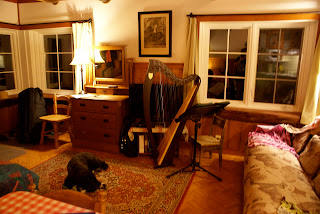 This is the inside of  my lovely lakeside carriage house / cottage.  It's a historic old building, with 3 generations of local history.  It's attached to the 'big house', but entirely self contained and private, with its own small lawn, barbeque and fire pit.  these windows look out on the lake.  I brought my harp along, as I had several upcoming playing engagements, and was badly out of practice.  What i didn't think to bring, in my rush to leave home, was my tuning tools, so it was so badly out of tune with the change in humidity and the warm weather we had, that it was virtually impossible to play.  .... but still highly ornamental. 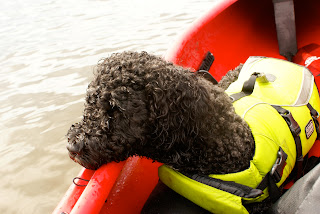 And here's Maestro, feeling very sorry for himself on a kayak paddle along the shoreline.  He'd much rather be leaping through the waves than sitting quietly in the boat watching them. 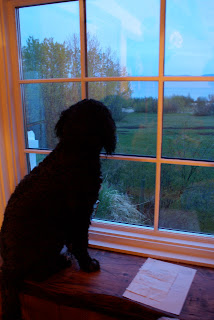 He discovered that the window ledges were perfectly sized for a large-ish dog to sit on and gaze wistfully out at the lake any time a thoughtless human ignored his pleas to go exploring.  (the lake is the blue you can see beyond the lawn and shrubs) 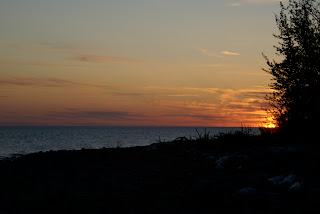 The beach was so private, I took to walking him along it late in the evenings, just before bed, in my pyjamas.
Posted by gfid at 11:43 PM 5 comments: