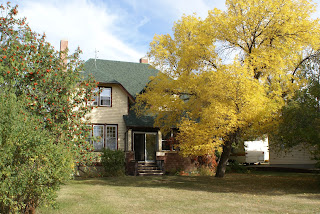 This autumn it will be 7 years since I bought the house.  In the fall of 2012 the  yellow and brown paint was peeling, and the borders around the foundation of the house were filled with grass and weeds. The yard, 4 lots wide, was a huge expanse of grass that took 2 hours to mow. It had been a dry summer, and the trees, shrubs and lawn were heat stressed and brittle. 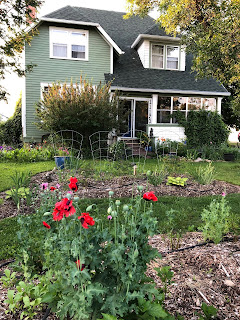 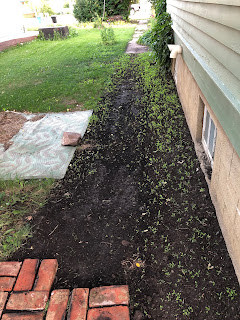 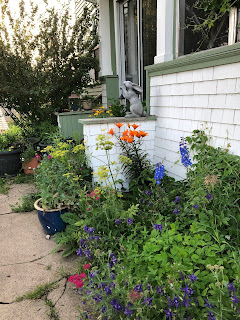 eventually as well. Amongst the weeds and quack grass in the beds against the house were a few rugged, ancient perennials! Heritage poppies, delphiniums, columbine and icelandic poppies were barely holding their own... but with some encouragement, they now fill the beds. I planted a forsythia in there a few years ago, that I'd given up on, but it's making a comeback this year. 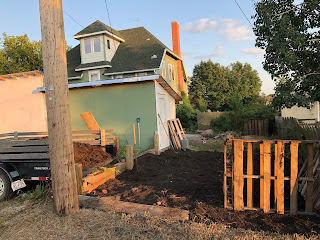 The back yard, once a desolate expanse of  lawn...  (can you tell I'm not a fan of acres of manicured grass?) now has a dry creek bed filled with smooth river stones, and a pond at one end, to divert and collect water away from the house. There's a shed and a greenhouse, and the rest of the space is in the process of becoming vegetable gardens, along the back lane. 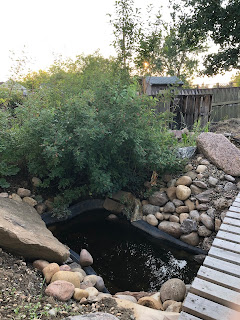 There's a little wooden bridge across the 'creek', near the pond, which is tucked at the feet of a massive rose bush with soft pink blossoms. She loves it that the water collects there for her, and shows her appreciation with a  heavy blush of sweet scented blooms through all of June. 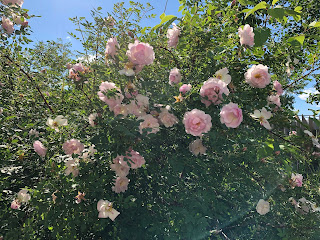 My grandmother's tiger lilies and irises follow me from place to place, 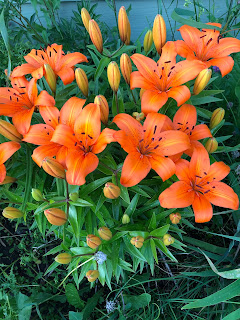 faithfully sharing their glory with every neighborhood they travel to. 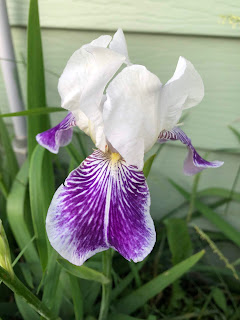 I've added some more modern roses to the front beds. This might be Emily Carr.... or Adelaide Hoodless...... or perhaps someone else..... I've lost the tags. 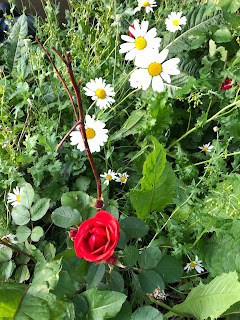 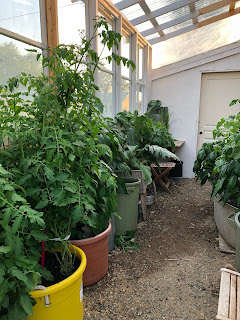 The greenhouse is in its first season of operation.... the painting wasn't quite finished before planting time. Perhaps there'll be a chance to finish it in fall.  there wasn't money for materials for proper beds, so I scrounged tubs and trash cans and an old bathtub. The tomatoes, peppers and cucumbers don't seem to mind.  There are also rosemary, lemon grass, tomatillos and gazania in pots in the greenhouse. when it's finished it will have electricity, so I can hang a chandelier and plug in a tea kettle.... and a solar heated shower in the back corner by the door connecting it to the shed. The windows on the left all hinge open from the top, on chains, for ventilation. 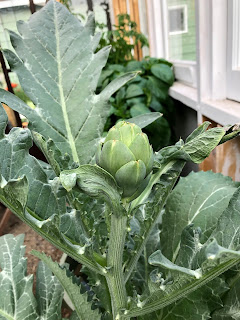 The star of the greenhouse is this artichoke plant. 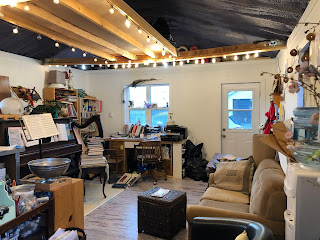 Across the yard from the greenhouse is the studio (formerly a small one car garage), where I give music lessons. It's chaos right now, as I spend every available moment working on the yard, but you can see the piano, the desk, and in the foreground on the left is the table holding my painting and printmaking materials. there's a big work table just out of sight behind the painting supplies. In the basket cube front and centre are wooden Brio trains & tracks for siblings of students to play quietly with while they and Mum or Dad wait during lessons.  the studio is my happy place, especially in winter, when I can't play in the dirt. There I can make all the mess and noise I want, without bothering my B & B guests.

The little sofa folds out into a bed. When I know I'm going to be working in the studio late, I make the bed up so Mr. Dog can get his beauty sleep. He doesn't like being up late, and he mutters and grumbles at me about it. When I finish what i'm working on, I join him there for the night. Musicians on the Home Routes circuit who stay at my home often choose to stay on the hide-a-bed in the studio rather than in the house. I used to apologize when it was the only bed available, but they often seem to prefer it.... It's never in the state of dishabille you see here when a guest is using it.....  so I've stopped apologizing. 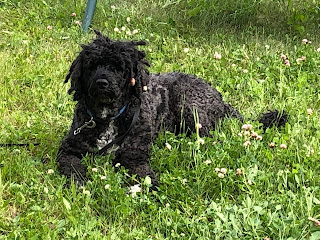