Set up camp & relaxed. Weather fair - warm and sunny. Mitch went downstream to falls and old building site. Snow 3 feet deep. Saw dippers on the river.
There were no folding camp stools or gas powered barbeque. 'Set up camp' meant digging a fire pit, lining it with stones and clearing the area around it of snow and /or flammable materials. It meant finding tree stumps or deadfalls that could serve as stools. The tailgate of the truck was the food preparation area, with all of our cooking utensils just inside the box of the truck and below our sleeping platform. Meals were cooked in fire blackened pots either set amongst the coals of the campfire, or propped on large pieces of wood which eventually succumbed to the heat and added to it. Mittens served the double purpose of keeping hands warm in the cold air, and protecting them from burning when removing a pot or a tea kettle from the fire. Water for washing dishes and, just before bed, ourselves, was heated over the last of the campfire's embers in an enameled dishpan, while we squatted around the fire to eat. When we first arrived in April, there was still too much snow to get into any of the government campsites, so we found quiet places off of little-traveled roads to camp at. 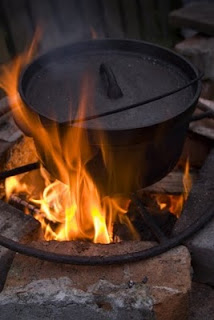 The campfire was our only source of heat, for both comfort and for food. Fire was life. The morning campfire warmed water for the first cup of tea of the day, and a pot of oatmeal. Lunch was usually leftovers from the previous evening's meal, or bannock with preserves from the previous summer's berries and fruit. I was getting very good at making bannock. Often it was closer to cake than to bread, made rich with dried apples or raisins I'd soaked overnight, honey and cinnamon. There was no need for refrigeration, as nighttime temperatures still dropped below freezing, and daytime temps were not far above it. Long woolen underwear was de rigueur, even for the baby, as were thick woolen socks and hats. He spent much of his time in a corduroy baby carrier on mum's chest, safely tucked and zipped under my coat, with just his hat and bright little eyes showing.
On a walk along the creek one evening, we spotted a winterhawk in the sky, and 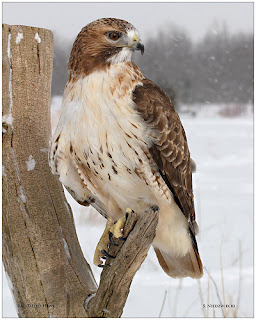 came across the remains of its recent meal. The hawk had left a few small, delicately striped feathers behind, so we picked the best one and tucked it in the brim of the baby's knitted hat. We began to call babe Pigeon Hawk, because he was small and not very fierce.
We'd brought non perishable food supplies - flour, margarine, salt, baking powder, honey, rice, oatmeal, etc. and canned berries and fruit. So there was always food, though not much protein. To rectify this, we poached - duck or partridge mostly, hunted by Mitch with a .22 rifle or, if we thought the game warden might be within earshot, a compound bow and arrows. Meat was a treat not enjoyed every day, until we discovered the place was crawling with porcupines. 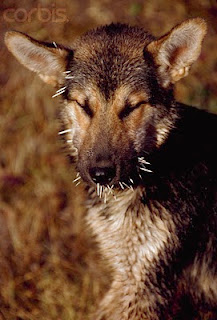 The dog, in fact, made this discovery for us, by coming back from a ramble with a mouth full of quills.
After some experimentation we learned how to best skin a porcupine without bodily harm. Skinning a porcupine also takes a very strong stomach, as they're crawling with vermin. After all, how 's a porky to groom himself without injury? Once the pelt is separated from the protein inside, you're left with a treat. Small cubes of young porcupine cooked on a stick over the fire proved to be quite delicious, and porky soon became a favorite. It didn't hurt that they were everywhere, and, being who they are, have few predators, so t hey don't seem to make any effort at all not to be seen or apprehended.
The plan was to find out who had the trapline where we hoped to settle, and, best case scenario, reach some 'sharing' agreement. Worst case, we'd reconsider our final destination.
Posted by gfid at 8:48 PM 7 comments:

Stayed Wed night at Pine Creek. Flat tire on trailer. Arrived [Thursday] at Takhanne River campsite. River running. Set up camp. Lots of snow. Warm weather. Saw our second Mountain Bluebird. Good omen.
http://schumpeter2006.org/images/1968-ford-pickup-pictures.jpg
April in the Yukon is still winter. Everything is covered in snow. Daytime temperatures hover around the freezing point on a good day. And we were CAMPING!
We had this John Deere green, home- made plywood 'camper' on the back of an old red Ford pickup we called Bertha. 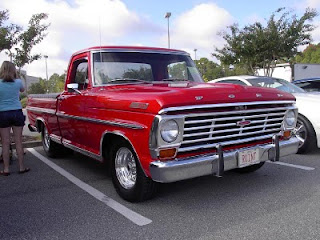 Bertha had seen some tribulations. The most memorable one was a few months before The Big Adventure In the Yukon, when my parter... we'll call him Mitch.... had a few days off work, and thought he'd replace her head gaskets. He worked as a 'doodlebugger'. No kidding, that's what they called them. Some offshoot of seismic exploration for the oilpatch, I believe. If you have any history with the oilpatch, you'll know that days off are rare and retractable. Someone didn't tell someone else that there was work to be done, or someone else didn't show up for the job, so Mitch's crew were called back before they'd even had time to change socks.
And I was left with a truck whose entrails were glistening in various locations on the dirt floor of the garage. In a small northern Alberta town about 15 miles from the nearest mechanic. In January. This was an unheated garage, whose only source of light came from the open door, or a trouble light on a 50 foot cord plugged into the kitchen wall.
Trouble light picture thanks to wikipedia

It was -35C that day, in the few hours of sunshine January brings. I swear it was colder in that garage. Certainly, it was colder by the time I had the baby settled for the night, and knew I'd have a few hours to work. But I had help. Yes, being the thoughtful guy he was, Mitch wrote out instructions for me to put the truck together in order to take it
to his buddy, that mechanic who was 15 miles away, so HE could put the new head gaskets in.
Well, I grew up with truck drivers. I can't remember a time when I didn't know what a wrench was, and nobody told me I couldn't do it, so I didn't know any better. I put the truck together, in the blistering cold, in the light of that lone trouble light. I broke a few lightbulbs in the process.... glass is fragile at those temperatures.... but in a few hours I had dear old Bertha back in one piece.... well, two pieces.... I couldn't find the hole in the oilpan, to put the plug back in, in order to pour in the engine oil. It had been a long night. I remembered my brothers talking about oil pan plugs sometimes being in odd places. I'd call the mechanic buddy in the morning; he'd be able to tell me where it was.
The words Mr. Mechanic said to me are burned in my memory forever. After I'd spent half the night putting the #%*! truck together in the dark in 30 or 40 below weather, he said, in a voice of pure condescension, "Diana, if you don't know where the oilpan is, just leave the truck alone." He knew very well I wasn't looking for the oil pan, but for the orifice IN the oil pan. There clearly was no point in continuing that conversation, so I hung up on him. Hard.
He didn't say anything at all to me when I pulled to a screeching halt in front of his shop early the next afternoon, grabbed the baby, slammed the door and handed him the keys. Nor did I say anything to him. The scorn in my eyes said it all, and my ride back home was waiting.
Bertha was a good old girl. After we built the plywood camper for her, she became 'Bertha Box'. It wasn't much of a camper, really. A plywood cube with a small heavy duty plastic 'window' on each side. The entire back side hinged at the top for entry. A ledge was built at the height of the top of the truck box, where we lovingly placed the mattress from our bed, complete with a bearskin souvenir from a previous adventure. a smaller ledge, attached to the wall at the foot was supported by hinges and chains, for the baby. Underneath this, in the box of the truck, were all our worldly goods, cooking and food supplies. In the trailer was our grubstake - lengths of stovepipe, rope, tools and hardware to build ourselves a cabin in the wilderness.
http://www.2020site.org/cabin/images/log-cabin.jpg 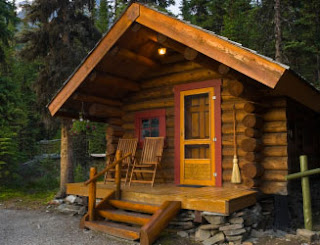 We had a spot all picked out. A sheltered valley amongst mountains, heavily forested, rich in wild game and fur, with a salmon bearing river running through it. After a year of practice living in trapline cabins and primitive farmhouses, we knew how to be comfortable without electricity and all that goes with it. We had the hang of heating and cooking with wood, and lighting the winter's darkness with a coal oil lamp. (the rented place with the dark, cold garage was a temporary luxury. We wanted to use power tools to build the camper, so we had to have electricity) We'd spent a year or more poring over maps and reading everything we could find about the Yukon, native land claims negotiations, climate and microclimate, fishing, hunting, and edible native plants. We were certain we could just show up, knock some trees down, build a cabin and move in.
Posted by gfid at 8:53 PM 8 comments:

i've stumbled over the journal i started keeping 35 years ago, when my partner of the time and i left northern alberta for our Great Adventure In The Yukon. my eldest son came across it a few years ago when visiting me, and stayed up all night reading it. there's another somewhere, which continues the tale.... the second has drawings illustrating moments that seemed particularly illustragenic. i hope it shows up as well.....
i'm thinking it might be fun to post some of the stories that the journal entries bring to mind, and, should i manage to get my life under control, perhaps i'll have some time to try illustrating them.....
Posted by gfid at 10:47 PM 11 comments: