the crocuses may have croaked, but 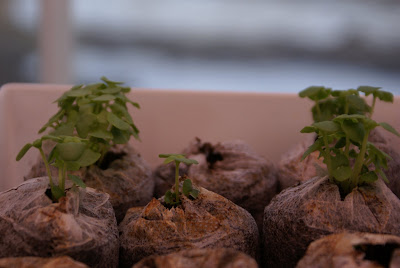 "this is progressing nicely" 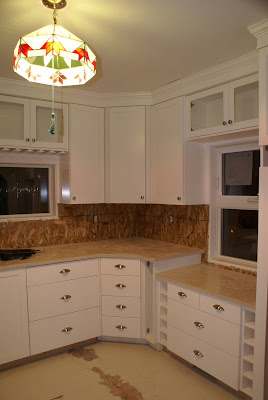 the quote in the title is from child #3, now finishing 2nd year engineering. at age 3, he squatted back on his cute little haunches, made a critical assessment of his latest duplo construction and chirped, "this is progressing nicely." it's become a standard family line. we're all still trying to figure out where he got his brains from. maybe there was a switch in the hospital.
Posted by gfid at 9:43 PM 6 comments: 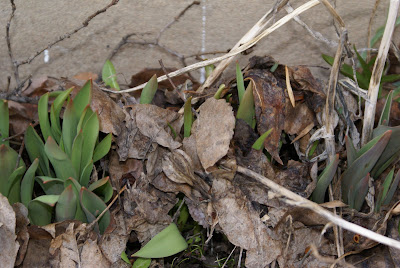 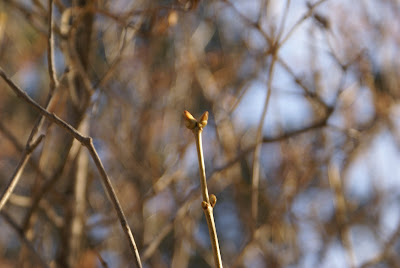 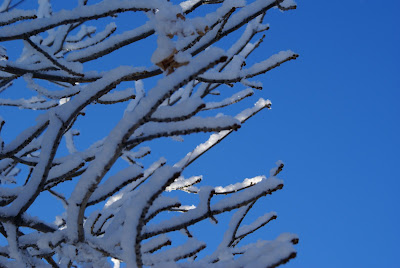 Wandering through the grocery store in the hour and a half break between two scheduled music practices today, I had $7.94 in my pocket. The credit card company has frozen my card because I can’t seem to convince them that I’ve moved, and I haven’t received a bill in months. It’s hard to pay a bill you never receive. And I’ve lost my bank card somewhere in the chaos of mountains of boxes, scattered tools and disorganized heaps that is my home, awaiting kitchen cabinets on Monday. I didn’t notice it wasn’t in my wallet until I left the house last night with friends, to go see La Vie En Rose, and stopped by the bank for some cash to pay for my ticket. I no doubt took it out of a pocket and set it somewhere and it’s had stuff piled on top of it. My friends are good friends – they loaned me $20. Enough for a ticket and a glass or 2 of wine @ the after show schmooze @ a local bistro. There’s money in the bank. I just can’t get to it till Monday. So today before leaving for the nearby town where my music rehearsals were, I emptied the pockets of all my jackets, dirty jeans and purses, raided the junk drawer in the dresser @ the front entry, and came up with $7.94 in coins, for lunch.

Things are expensive in Northern Alberta. $7.94 doesn’t go far. I’d forgotten what it was like, carefully checking prices and totaling things in my head, balancing the virtues of this against that. Odd how ‘normal’ changes in one’s life, without notice. It’s only during the last four years of my life that pennies haven’t had to be counted and re-counted and creatively coaxed to purchase more than would seem possible. But I’d already forgotten what it was like. A lifetime of frugal fretting was erased by 4 years of having just a little more than the minimal requirements. And I got to thinking that my meagre $7.94 is more than a goodly percentage of the world has at its disposal for lunch today. In the leanest of the lean years, when, by national standards we lived well below the “poverty line”, my children ate all the good food they needed, even if it was home baked beans for a steady week. They always had a safe, warm, dry place to come home to after school. And, lean as those times were, there was a way, with hard work, patience, and determination, for us to own a home. It wasn’t much more than a shack when we got it, but by the time it was sold, it had been transformed into a lovely home.

And I stood in the produce department looking around me, thinking…… that’s why we are here. That’s why my grandfathers, and my grandmothers' parents came here from Sweden and Norway. Canada was, and still is, the land of opportunity. And it’s true of the blonde woman with the small child in her cart, and the asian woman filling a bag with vegetables, and the black woman carrying her basket past me, and it’s true of our indigenous peoples. Though last night’s storm dumped a couple of inches on the tulips sprouting from the frozen earth, though nothing has grown here in 7 or 8 months, we’re eating fresh produce, brought here at enormous financial and environmental cost, just because we can. Because we’re so incredibly wealthy. And we don’t even know it. We take it all for granted.

This is no new realization. I’ve ranted on the same theme for years. But this afternoon it was somehow physical knowledge. It hit me somewhere in the neighborhood of my stomach and made me feel a little sick. The unfairness of life. The thoughtless greed of the society I live in…. the cost of our greed to voiceless people around the world.... another familiar rant. And I can’t change them. But I can change me. And it’s time.
Posted by gfid at 7:18 PM 6 comments: 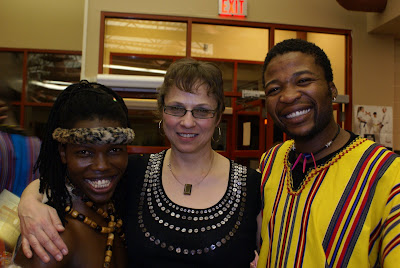 these young gents were my house guests for the past weekend, during which time i played the mother stereotype, making sure they got fed far more than was necessary, and their laundry got done. at one point, i told them, "i'm a mother. i HAVE to feed you." so they laughingly nicknamed me Mummy.

Thabo and Mnenewa are drummers for a troupe of 22 Sowetan singers and dancers, presently touring alberta with singer/songwriter Holly Wright. Ms Wright lived and worked in South Africa for 2 years, where she met and married her South African husband, who is also a musician. What a show they gave us!

on stage, my 2 softspoken and well mannered boys transformed into musical athletes, carrying and driving the music with their masterful drumming, singing rich harmonies, and dancing with a passion and vitality that brought the crowd to its feet in thunderous applause. such excellence is awe inspiring and humbling.

and to think i had to be coaxed into hosting them. if i weren't so pleased to have got to know them, i'd be ashamed.
Posted by gfid at 3:39 PM 12 comments: 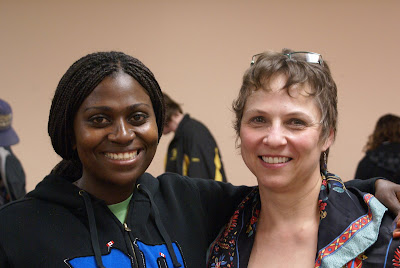 Memeza Africa is visiting our small northern alberta town. they are a singing group made up of young men and women from Soweto, South Africa. they are living a dream, to travel the world, and make their living with their music. we had a chili supper for them last night, when they arrived in town. before dinner, they sang for us. the music was so beautiful it made me cry. one of my violin students is in the high school group who brought them to town, so he asked me to join him in playing some fiddle tunes for them after dinner. they're one of the best audiences i've ever played for. not only are they enthusiastic and generous with their applause, but by the end of the last tune, some of the fellows were singing rhythmic bass part along with our duet of 'Boil em Cabbage'... a sort of deep, smooth round sound, like striking immense, weathered hollow logs in an ancient forest. gave me goose bumps.

two young men, Thabo, and Mnenawa are staying for 2 days in my guest room. i hadn't planned to accept billets, as my kitchen is less than a week from receiving its visit from the cabinetmaker (in a STATE), and my bathroom is in a similar, though lower case, state. functional, but a mess.... but, as i mentioned, one of my violin students is involved in bringing them here and they were badly in need of more billets. he's a very sweet boy, so i couldn't say no. and, after all, hospitality is about sharing what we have, not about showing off what we have.... so, i picked up my tools, swept sawdust and cleaned madly all day saturday, unfolded the murphy bed in my teaching studio, and such as it is, i'm sharing my humble abode with them.

i had only a vague remembrance of the name of Soweto... i was living in the bush in the Yukon, in the '70's, at the time it was in the news, and i was very isolated. i have since read Nelson Mandela's book, Long Walk to Freedom, so i'm not completely ignorant, just pretty ignorant..... but i have a questioning mind, so i've spent this morning with my morning coffee, in my comfortable armchair in my comfortable (even if it is a work in progress) home, with my laptop, as my young guests slept. And here's what i learned.

Soweto, believed to be an abbreviation of Southwestern Township, is a 'suburb' of Johannesburg. it was created several generations ago when there was an outbreak of disease in the city, and it was determined that the poor were, if not responsible for, at least very susceptible, so it was not desirable to have them around. they were told to go elsewhere. as they were employed by Johannesburg society, they couldn't go far, so Soweto was born. no thought was given by city planners to providing infrastructure at the time, and it's been an uphill battle providing simple needs like water and power ever since. Many of Soweto's schools, according to one source, have no running water. many homes have no running water or electricity. the hospital in Soweto delivers 1500 babies every day. it's a large city.

in 1976, there was a public protest made by students, against being educated in Afrikanns, which was the language of the Dutch descended ruling class. the protest was made up of children, mostly, but the military was called in, things got out of hand, and children were shot. the rest, as the cliche' goes, is history.

as we walked the 3 blocks from dinner to my home last night, Thabo said. "this is a very quiet place... very safe." i answered, "yes; i don't think we appreciate it as much as we should." our eyes met, and he nodded.
Posted by gfid at 8:30 AM 2 comments:

i had acupunture treatment last week for carpal tunnel syndrome and aural nerve damage in my hands. WCB's (that's Worker's Compensation Board, who are supposed to take care of workers injured by their jobs) bought-and-paid for specialist tells me this condition is not caused by 40 hours a week at a computer, that it must be the result of the few precious hours a week i manage to spend with my fiddle. as the problem has only reared its ugly head since taking on the 40 hrs a week desk job, i'm skeptical.... but i'm not keen on anyone slicing my wrists for me, and the drugs they tried me on sent me into a near-suicidal tailspin. I looked afield for aid.... and was reccommended to chinese angel of mercy.

treatment was on thursday. by saturday, i thought my hands felt rather better, so i closeted myself with my fiddle, a metronome, and some favorite jigs. the metronome gave me actual numerical proof that my hands are once again listening to my brain. so, when the irish band i play with rehearsed on Saturday, i was ready. i lead into the first jig on the playlist at a speed i haven't attempted in months. there were sideways glances among the fellows.... this was looking to them like a setup for a train wreck. but we shot through it like a polished canonball. after flopping back in their chairs, and wiping their brows, one of my beloved musical soul brothers said "whew!" gave me a big grin and exclaimed, "she's back!"

so the dreams of one day acquiring a very fonkay electric fiddle have been revived. this one's a Keebler. 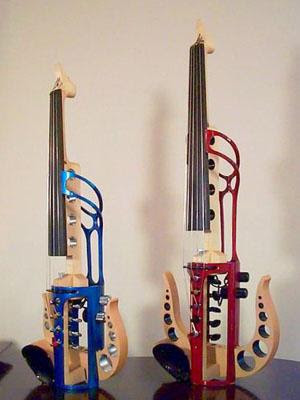