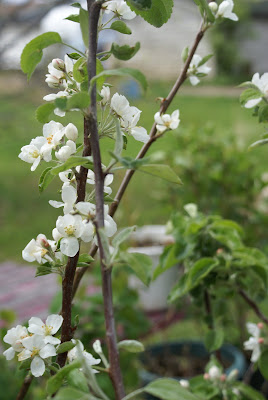 the vitally healthy specimen you are admiring is a Parkland apple tree, developed with northern gardeners in mind.  it's reliably hardy to zone 2, with care.  Waynorth is rated as zone 2.  This magnificent Malus produces perfect pommes very like a Mac apple. they're sweet and crisp and of medium size.
he and his twin (maybe his clone?) now reside on the west side of my 78 year old house, toes tucked comfortably against the foundation.  after i've reviewed the process of espalier for fruit trees, and built the necessary supports, they will be trained with their sturdy arms spread against the house, hugging it for protection against the cruel grasp of our vicious winters.
my house is a tree hugger, much like me.  she's one of the oldest buildings in this little cowtown, built when the railway first laid tracks through northern alberta. i'm certain i heard her give an audible sigh of relief and a faint moan of pleasure when i began to remove the layers of grime and bad taste left by decades of transient dwellers. as if i'd scratched her right where the itch was. there are gnarly, obstreperous lilac bushes against the southwest corner of the old dear that are probably as old as she is.  i hauled 2 truckloads of their trimmings away last spring.  very soon they'll be filling the studio room where i give lessons and practice my music, and whose windows they screen, with the heaven-scent of summer.  they'll be good company for young Malus, if i can teach them some manners.
Posted by gfid at 11:19 AM 7 comments: 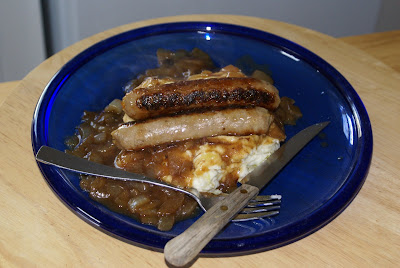 many thanks to Cicero for posting the mouth watering photo, and delicious recipe for bangers and mash.  it looked so fine that it was the first thing i thought of when my kitchen was finally functional again. this photo is my own rendition of said delicacy.  my 7 year old granddaughter was here for the weekend. when i told her i was making bangers and mash for the evening meal, she looked at me through her eyebrows and said, "you're kidding, right?" she opted for nacho chips and cheese dip instead.  she doesn't have her granny's appreciation of peasant food.
it's been a long grind... since January. the kitchen is not quite finished.... still the last bits of tile to put up and grout, the last of the bead board, and trim, and a final coat of paint on those.  but the cabinets are in, and the floor and new windows and door.  the boxes that had taken over the dining room all winter are gone.  emptied into those lovely new cabinets.  the cardboard will help mulch the paths between the raised  beds planned for the garden.
server very twitchy.... will post picture later
Posted by gfid at 8:27 PM 4 comments: 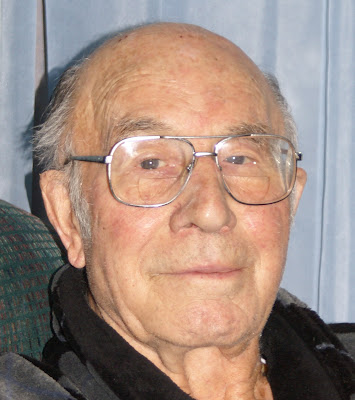 this is my dad.  born in 1921.... i guess that makes him 87 years old.  he had a near fatal accident involving a head injury 11 years ago today.  prior to that, he was exactly like the 70+ year-old swede on the 'participaction' ads Canadians of a certain age are so familiar with, who was in better shape than the average canadian man half his age. ("don't just think about it, do it!  participaction, get with the action"  all about keeping physically fit, and active) he'd been a trucker all his life. at that time had 2 sons and a couple of other employees doing the driving, and he still did most of the service work on 4 big semi tractor trailers, and their various trailers.
after a 200 lb piece of metal fell on his head, narrowly missing crushing his brain, he spent 6 weeks in intensive care, and came out of the hospital an old man.  he sold the trucks, and the business, shortly thereafter.
today he told me he and my stepmum are considering moving to a seniors' residence.  and he thought maybe he should get a cell phone so he could keep in touch with her when he's out running errands, getting groceries and such like.  she doesn't go out anymore. she's not admitting it to anyone, but she's dying of lung cancer.  despite a problem with double vision, from the accident 11 years ago, and the irretrievable loss in strength and vitality suffered then,  he's still a very independent man.  this was a very big thing, admitting that keeping up the house and yard are getting to be too much for him..... and admitting that they might need a lifeline... the cell phone....
so this afternoon, my youngest son, one of the family technokids, and i picked Dad up a cell phone. we programmed all the family numbers into it, and showed him how to use it.  in his big, calloused, blue-collar hands, the phone looked like a toy.  his fingers are so big and square there was no way he could punch those little bitty numbers to dial out, so programming the numbers in wasn't so much a convenience as a necessity.   and this man who has been my pillar of support for 51 years felt awkward and incompetent with the silly little thing, but he was determined to master it.  because it's a way for him to know the obstinate, and fiercely independent woman he has loved for 48 years is as safe as he can keep her without humiliating her.
when i was a little girl, my dad was my hero.  today i understood that he still is.
Posted by gfid at 12:29 AM 11 comments: 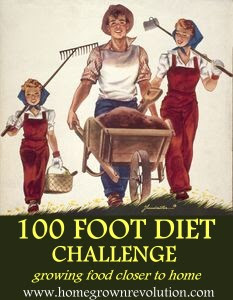 you can find it here

surfing over lunch, i came across this. as the move to the 'new' house was as much for e-footprint sized reasons as any other, i've been plotting and scheming ways to make my little town lot into a little eden. not easy, as the town has innumerable bylaws that seem to be there for the sole purpose of preventing anyone from doing anything sensible.... such as, no chickens (only as many annoying yappy little dogs as you can stuff in your abode, and which use every yard but their own as a dumping zone) no clotheslines (considered an eyesore, but littering one's yard with bigger than life, badly painted plywood cutouts of cartoon characters appears to be encouraged. dead and decomposing automobiles also are in vogue)

so, i'm making it official. as much as is possible, landscaping efforts will be edible. berry shrubs and hardy apple trees will form the much needed privacy hedge, and the first of the raised vegetable beds are even now awaiting the soil that will feed the little green babies in the south porch nursery. the basil is doing very nicely, and the tomatoes, after a slow start, seem to be in a hurry to catch up. the lettuce seedlings are already showing signs of their future glorious mix of colors, and the scarlet runner beans are on tiptoe, straining to kiss the full spectrum light tubes above them.

with a growing season of something less than 90 days, i know better than to think i can produce fresh food all year, but i enjoy a challenge. even the 100 mile diet might be wishful thinking at present, but we'll start with what we have. there's a root cellar taking shape somewhere in my left frontal lobe, or wherever these things are born, and the pressure canner and deep freeze are already in residence. a good friend raises bees.

i've also approached the publisher of the local newspaper with the idea of a column on the topic. he's discussing it with his editor. maybe if the research is done for them, those things that ARE accessible will get the appreciation and market share they deserve.

a record of my efforts will be here, @ grannygardens.
Posted by gfid at 12:02 PM 3 comments: 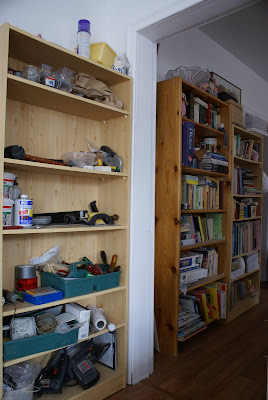 though i steadfastly maintain that chaos makes me crazy, it stalks me. i recently told my kids "if i ever again even look like i might renovate a house while i live in it, lock me up and take away all my money till the glint of insanity leaves my eye." my daughter, who may have heard this before, just gave me that tight little smile that says, "sure, mum" with more sarcasm than words could ever convey.

after searching for half the weekend for my tiling tools and a tape measure (of which i have, at last count about 496) i gathered every tool i could find in the place (haven't dared approach the garage yet) and sorted them in an empty bookshelf (just to remind the contents of the other bookshelf, alongside, that i haven't abandoned them, and one day soon we'll spend some time together). there must be a lot of them in the garage. i did find one tape measure, which doesn't reliably retract, and some of the tiling tools. so i may have to trot over to the hardware store after all... the garage is a dangerous place till i can get the dining room furniture and the rest of the stuff still unsorted from the move out of there.

how many psychiatrists does it take to change a lightbulb?