this is the finished side of our current Habitat for Humanity duplex, and the family who now own it. taken the day of their home dedication cerimony. a certain grannyfiddler/harpist we know provided the music. 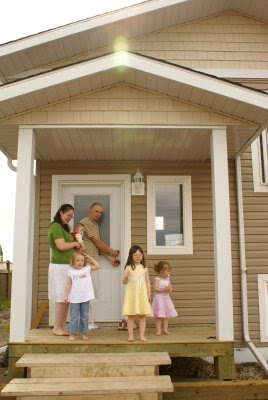 today, a team of 9 of us from the evil oil company i work for spent the day on the other side, painting, installing light fixtures and emptying the basement of unneeded construction materials. so, obviously, the people working for the evil oil company aren't evil. they're actually mostly a really terrific bunch of people, and there are very few of them that i'm not going to miss, when, in 7 sleeps, i'm finished there. but i won't miss the corporation. and here's why.... after months of hearing boasts from the bigwigs in the headshed about what a phenomenal year the company has had, (record breaking profits) and how well positioned it is relative to others in the industry, first, annual employee bonuses were cut, then the BIG CRUNCH was announced. this is an old field. it's expected to produce well for another 15 years even without major new exploration. we're very far from the centre of the universe, where the head office, and all the 'important' people are, so, by oil compay standards, we run pretty lean. oil exploration has been cut everywhere in alberta.... mostly a political response by the big corporations to drive home the point that they are very unhappy about the new royalty regulations initiated by the current government. so even without new wells to develop known reserves in the area, this field pours money into their coffers faster than they can count it. for those who aren't in on oilco jargon, reserves are those quantities of oil and gas that are known to exist in land the company in question has the mineral rights for. it's like money buried in the back yard, left to you by very rich, Great Uncle Fred who thought of you as the child he never had. you know it's there. you know it's a LOT. all you have to do is go get it.

so, when i handed in my resignation, my area superintendent was astonished to be told that they couldn't afford to replace me. they could have afforded to keep me, but they can't afford to hire someone else to do the same job. now i'm not young enough, or pretty enough that they just kept me around because i was so ornamental, and there's no slack in the department where i work that can be taken up to make sure the work i do gets done when i'm gone. and if it doesn't get done, the maintenance department in a field where most of the work done IS maintenance, will have some serious trouble getting its bills paid (cuz i'm the one who paid those bills for them) ...and if the bills don't get paid, people sending those bills are going to make damned sure no more bills are run up. and i'm not the only one this whole chain of events has occurred to.... no one's very happy with me in that office right now. i really am counting the sleeps till i leave. trying not to feel guilty, but of course i do anyway, because the mess is left in the laps of people who, for the most part, i've enjoyed working with.

so, after spending a day painting doors and playing gopher to a crew of 20 volunteers who're all there to help a single mum with 4 kids have her own home.... after explaining the philosophy of Habitat For Humanity to those who came, who'd never heard it before, seeing the delight in their faces when they heard it.... after a day of hard work, watching them all trudge through the snow to their vehicles, tired and dirty and smiling, some asking when they could come back..... i came back to my daughter's place, where i'm staying the weekend, had a long, hot, delicious bath, and checked the email and the blog. Lindsay Lobe had posted about Albert Schweitzer and his philosophy "Reverence for Life"..... and i thought, "how appropriate; the perfect ending to the perfect day." and i knew i was doing exactly the right thing trading the oilpatch for the 'philosophy of the hammer' as HFH's principles have been called.

and i'm happier than i've been in many years.
Posted by gfid at 5:42 PM

How is it that people as individuals are usually nice but that groups of people who form corporate structures and governments are not? Do they need to get out of those ivory towers where the air must be too rarified for normal human brain function?

I'm glad you're out of there and even though there seems to be a mess in your wake it's not of your making. The one hammer philosophy is a good one to follow.

I've volunteered to cut my own hours mostly because my boss was threatening to cut the hours of a single mother with two children because she has the least seniority. There are others who could afford to do so but now they're holding on (to jobs they abhor) like grim death.

su - you GO, girl! i'm looking forward to seeing what the extra time to be Susan, in her element, produces. and thanks, once again, for the support & encouragement.

Thanks for your comments in relation to the devastating bush fires down under.
I think Albert Schweitzer would be mightily impressed with the work and philosophy of Habitat of Humanity. He felt we should follow our chosen paths and not feel we have to rush out and attempt to save the world in some far off exotic place, but rather to follow our naturally occurring heart and intuitive feelings, directed towards the service of others which Schweitzer contends exemplifies the idea of how we show reverence for life- I am sure you have gathered that already!!
Best wishes

ll - i'm thinking of having a 'quote of the month' display in the ReStore, with a bit of info about the person being quoted.... the idea being to increase awareness of the need for a strong social conscience, and using the fame of 'great' people to get it across. thanks again for your support and encouragement. i think of you often down under, and send off a prayer for you, when i see/hear the news of the murderous fires there.

I did hurricane relief work in Miami after Hurricane Andrew (worked for the Red Cross then) and in one neighborhood there were more than 1,000 destroyed homes (roofs off, windows out, some walls down). There were also about 20 homes that were relatively untouched and intact. Guess what? HFH homes, every one of them. Love and lots of nails...

I know you've been sleeping in a new place for a few nights now. I hope all is going well and that we'll hear from you again soon.

Gary - too funny. i've heard HFH build organizers complain about how many NAILS unskilled volunteer carpenters use. now i have a comeback. 'course, the love is a factor too.

Su - actually, i'm sleeping around.... got several beds going. i'm home now; my eldest son is a very fine carpenter, and is helping get the house ready for sale. (sniff) .... and i stay w my daughter, when i'm working on the ReStore setup in the city ....and i've set up my futon, bookshelves and sewing machines, etc in the home of a single mum friend who'll use them. her kids are calling the new book filled space in their basement 'the library'. i'll set up my living room furniture there when the house sells, and it'll be quite cozy.

M -it's in the very early startup stages... hardly a sprout. and it's amazing all the little trivial things that will slow down the important stuff.

i'm impressed. not that you're not ornamental, but that you volunteer to do good deeds. i'm guessing painting and hammering and cleaning is hard work, because i've done some of that in repair situations.
you give interesting insights into the oil industry. cutting production to protest being taxed seems a bit juvenile. unless, of course, the tax is severe enough to threaten the survival and long-term prospects of the company.
it smacks of taking your doll home because you didn't get to use the blue teacup at your friend's tea party.
grats on your new direction in life, gfid.

sera - you said it very well.... taking the doll home in manipulative spite. the co. i worked for had record-breaking profits last year.... there's no one hurting in upper management. it's stock prices that are plummeting, not actual profits. a bit weird, really. so the whole process is to appease shareholders and use middle income local contractors whose jobs they've cut, to drum up some sympathy for the poor suffering millionaire shareholders. equally weird and twisted but it seems, sadly, to be working.