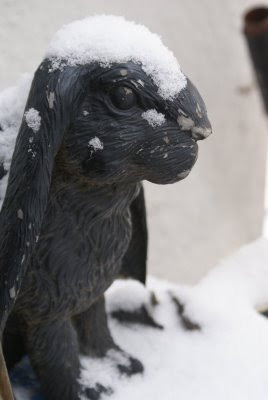 the Easter bunny is frozen solid. if his profile looks a bit odd to you, it's because part of him shattered and broke off in the cold. part of one of his ears is missing too.... who knew delivering pretty eggs could be such a hazardous job. he should join a union and complain about the working conditions.

spend your Easter break in beautiful Waynorth! book your reservations now, for Easter egg hunts in the snow, sleigh rides through town to show off your fur-lined Easter bonnet, and snowshoe races to church for the sunday service. the winner gets to sit closest to the heater.

it's not always like this here at the end of March. some years it's all slushy and melting and the pussy willows are beginning to peek out.... and one can, with a little imagination, convince oneself that winter won't last forever.

in the Yukon, now, things are like this right through Easter break. when i checked the weather network this morning, it was minus 20-something C in Dawson City, where eldest son lives..... which reminds me of one Easter when he was small, and we were all still living in Dawson City.

some folks got together and planned a big Easter egg hunt for the kids. it was a huge event. local businesses donated chocolate and candies and tinsel and nest fluff and baskets and doodads and whatnots. early in the morning a group of enthusiastic volunteers drove the long winding road from Dawson City, at the banks of the Yukon River, up the extinct volcano it nestles at the foot of, known as the Midnight Dome. it's called that because it's the place locals like to go to on summer solistice, to watch the sun circle the sky and not go down at all. it's become an annual bash. the view is spectacular. you can see up and down the Yukon and Klondike Rivers for miles up there. you're surrounded by rugged hills and forests, underneath a sky as deep blue as a broken heart.... so the Midnight Dome was the place of choice for the Easter egg hunt.

the volunteers made the trek up the dome, had huge fun tucking away all the booty, and came back down the hill grinning from ear to ear, thinking of what a hoot it was going to be watching the kids find all that glorious junk. the kids, by this time, had all been collected, and were waiting eagerly for the fun to start. into vans and station wagons and various assorted modes of transportation they all piled, and back up the hill everyone went, noise level raising with the altitude, till they all arrived at the top in an ear rupturing explosion of sound.

"Release the children!" someone called, and the extinct volcano poured forth a flow of small bodies, cheering and shrieking with glee. dozens of snow-suited and mittened little people poured from their wheeled prisons and the search was on!

i won't go into details. 30 years later, we're all still too traumatized to dwell on it..... the happy cries turned to wailing and gnashing of teeth, as, one after another, the kids found bits of fluff and tinsel, shreds of cellophane and foil, tattered and ravaged baskets and wrappers, but no treats. there wasn't an egg or a chocolate or a marshmallow goodie to be found. but there were clues. in amongst the shredded and mutilated remains of the feast were footprints. bird footprints. large bird footprints. on every lamp post and tree within sight were very smug looking ravens. dozens of them. it was like something from an Edgar Allen Poe story. all those ravens looked down gloatingly on the crying children and the stunned adults, and they chuckled. yes, ravens chuckle. they have an amazing vocabulary. they're very smart birds who live a long time. they play and they scheme, and they do pranks, and they chuckle. it's more than just a little humiliating being laughed at by a bird. the trip back down was more subdued, punctuated occasionally by the broken hearted sob of a child. somehow, someone found some Easter goodies that hadn't got sold and eaten already, and things were done again, on a smaller, less boisterous scale, and the day was redeemed somewhat.

chocolate doesn't seem to agree with ravens. Dawson City's raven population was a bit out of sorts for some time after that. not their usual carefree selves. and there were reports of really disgusting volumes of vile slime falling from the sky as a raven flew over. like it was our fault they felt rotten, and they were getting even.
Posted by gfid at 9:52 AM

Oh my, what story! Too funny on the ravens ... not funny for the kids.

oh my goodness, how terrible for the parents, forget the kids!!! well, maybe remember the kids too....actually this is a hysterical story although I am amazed people live up there in that weather...and your poor little bunny covered in snow...how sad!

I am curious~how long is your actual summer? ;)

What a wonderful story which was beautifully written, to evocatively capture the essence of childhood excitement and subsequent bitter disappointment.

The Dawson community I would think would be typical of many communities everyhwere at that time. Then I think children were more likekly to spend much more time playing just as communities were more interactive.
The end of your story about Ravens possibly suffering afterwards reminds me also of a childhood incident.

It had become known a stores stock of old chocolate was stale and about to be thrown out. It seemed wasteful so we were offered loads of the chocolate.

It was a feast not to be missed and inevitably many became sick from sheer over indulgence to stager home as if in a gluttonous stupor.
Best wishes

That was truly a wonderful story - hilarious and sad too. I hope the ravens learned a lesson but it's doubtful. My Crow would be looking for a good shot of brandy in that clime but he's a very smart bird.

cicero - no one was laughing that day, but it's become local folklore, and everyone laughs now.

linda - we have anywhere from 60 to 90 frost free days, depending on the year. summer is lovely and lush and green and warm.... just very short.

lindsay - hmmmm.... maybe the ravens did the kids a favor? yes, it seems rare to see whole communities pulling together for something that isn't organized sport or high tech for their kids these days, doesn't it?

su - my guess is that the ravens did learn from it. they're very intelligent creatures. yes, crow would be sipping a brandy, looking for fruitcake.

I love it ! Very creative ! That's actually really cool Thanks.