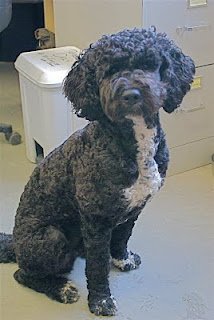 ok. so i have no life. the most exciting thing that's happened is my dog is nearly grown up. and very handsome. this was taken just after he'd had his first complete haircut. Last week as we returned home from a walk we passed the backyard of a burly fellow with a handlebar moustache, who was firing up his barbeque. it was a few degrees above freezing, so it felt like spring. Maestro was doing his dolphin dog routine, diving into the snow banks and running with his nose down and tail up, making a trench in the melting snow. i was laughing at his foolishness, when the burly fellow called from behind me, "what kind of dog is that?" i replied "he's a water spaniel". Mr. Burly called back in his deep, gruff voice, "he's beeeyooodeeefull". made my day.
Posted by gfid at 10:51 PM

Maestro is indeed beautiful, handsome, and most definitely unique. If you can't do anything about the snow it's just as well to plough a trench through the stuff with one's nose down and tail high. Dogs are so neat in that they have no expectations, regrets, or wishes for things other than your company and what's right there in front of their noses.

I've been hearing from a few people that spring has been unusually late this year. Since I've never spent one here before I don't know what to expect but I do miss the cherry trees and azaleas.

He really is beautiful!

Not much happening by me either. We probably have less snow than you as our snow banks are basically gone but it still seems so chill and dull. Soon though, it will warm up and color will burst forth.

su - i have to work really hard at being grumpy about the snow with Maestro... but i manage to pull it off. the forecast is for warming here on the weekend. hope you have the same good luck.

cicero - i'm so tired of winter that i'm even tired of saying how tired i am of winter.

he is beautiful! and he makes you laugh, a perfect partner!

he is, indeed the perfect partner. and as a bonus, he doesn't snore, and doesn't mind that i do.

There is no such thing as exciting people and non exciting people since the excitement is in discovering the untold story …………………..it is more to do with the way the story is told and the images and flashbacks that captivates our interest or make it an interesting story.
Bloggers oft reveal their unique story and I have learnt many events surrounding your formative years and the ensuing battles and successes which shape the way you write about things today. That is all very interesting -….just as I recall the first few lines about your puppy who has since grown up to be such a handsome devil - this Maestro – he would look good as the mascot to be in front of an Orchestra!!
It’s always interesting to meet bloggers - when I met Gary and Anna from Canada! I immediately almost felt like I was reunited with an interesting old friend –I’m sure I would feel the same if I met up with some others including yourself; all interesting people!
Best wishes

lindsay - i'm very glad the puppy phase is mostly over. he really was devil for a while, but he's a lovely gentle, fun-loving companion now. yes, it's true - our perceptions of things not only colour our experience of them, but speak volumes about us. i have Oz on my bucket list.... we may yet speak face - to - face :0)